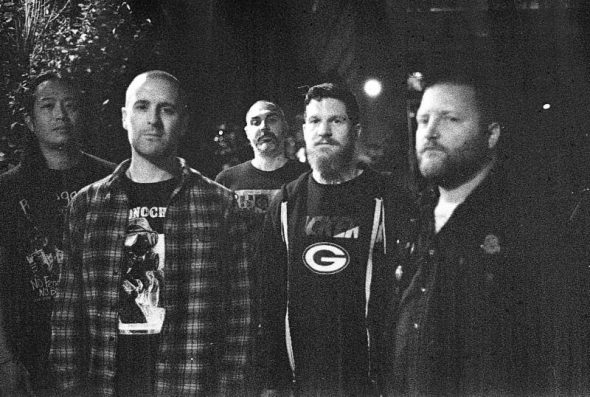 Southern Lord has signed North American hardcore outfit SECT, the band comprised of an international cast of scene veterans hailing from the likes of Cursed, Burning Love, Earth Crisis, Catharsis, Undying, Day Of Suffering, No Tomorrow and many more. The result of these musicians’ alignment is a caustic, riotous, belligerent style of vile hardcore fed by a boundless well of socio-political vitriol.

With two countries and four hometowns between them, SECT was born when two project ideas between tour mates merged into the same experiment, finally taking shape in 2015 and culminating in recording sessions in Raleigh, North Carolina in early 2016. The band is comprised of five veterans of ’90s hardcore who cut their teeth in that formative moment of political, cynical, antagonistic extremes, uniting vocalist Chris Colohan (Cursed, Burning Love, Left For Dead), guitarists James Chang (Catharsis, Undying) and Scott Crouse (Earth Crisis, The Path Of Resistance), bassist Steve Hart (Day Of Suffering, No Tomorrow), and drummer Andy Hurley (Racetraitor, Fall Out Boy, The Damned Things).

Offers Colohan of signing with Southern Lord, “My rule of thumb with labels these days is to work with one that I own at least five LPs from. Smart music business opportunities don’t mean shit without a true respect for each others’ tastes, aesthetic and passions. Between their classic doom alumni (Earth, Sunn, Boris, Sleep), their reverent reissues of cult thrash bands like Nihilist and classic hardcore like Poison Idea or Bl’ast, and the equal love they put into modern bands with the spirit of all of the above (like Power Trip or Nails), a label doesn’t get much closer to that ideal for me than Southern Lord. It was an absolute pleasure working with Greg and the SL family with Burning Love and I’m beyond excited to have SECT join their ranks.”

Southern Lord owner Greg Anderson offers, “As soon as I heard about Chris Colohan being in a new band I immediately was excited and preordered their LP. I was not disappointed. SECT are harsh, unforgiving, and brutal in all the most effective ways. We’re extremely honored to be chosen to work with them. We will proudly be their ally in this battle.”

Following their enthusiastically-received, self-released, self-titled LP in 2016, which passionately infused the brutalizing and infectious elements of each of the artist’s respective sounds, SECT will enter GodCity Studio in Salem, Massachusetts with Kurt Ballou (Converge) this Summer to record their follow-up LP, and Southern Lord debut.

SECT gets right down to the blast beats and breakdowns that fight it out in their chaotic jams. They cut the shit and go for the throat with no time to waste “because the Orwellian police states and irreparable social and ecological disasters we once saw off on the horizon are now on our front doorsteps, in full swing. And in just such a volatile, precarious moment as this for civilization, there is more reason than ever to keep lashing out at a world more suicidally bent on its own destruction and the exploitation of people, species and the ecosystem itself, than perhaps ever before in history.” For SECT, this is the purpose of hardcore as they know it, conveying an urgency that transcends age, credentials or scene politics, to convert desperation into real talk and action.

SECT has several Northeast US tour dates confirmed for early next month, with a run through Baltimore, Wallingford, and Brooklyn, March 10th, 11th, and 12th, respectively.

Stand by for steady influx of updates on SECT throughout the coming months.