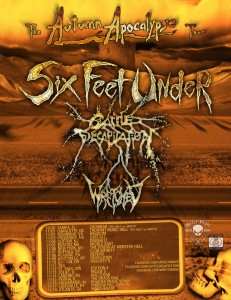 Death metal legends Six Feet Under will be embarking on a headlining tour this Fall. The Chris Barnes-named Autumn Apocalypse Tour will include label mates Cattle Decapitation as well as death metal newcomers, Wretched. The journey will commence on October 30 and run through the first half of November, with the full routing available below.

Led by the inimitable Chris Barnes, possessor of one of the most dominant and instantly recognizable voices of the death metal genre, Six Feet Under now features new guitarist Ola Englund, longtime guitarist Steve Swanson, new bassist Jeff Hughell, and drummer Kevin Talley, whose history blasting for Dying Fetus, Misery Index, and Chimaira speaks for itself.

Cattle Decapitation 2012 finds the band reinvigorated and churning out some of the most visceral, in-your-face, and downright horrifying tunes in their renowned discography of brutality both lyrically and musically. Said Decibel Magazine of the band’s recently-unleashed Undead full-length: “This is the best thing SFU have recorded since Maximum Violence… [Chris Barnes] hasn’t sounded this focused or committed in years.” Listen and order at Metal Blade.

Cattle Decapitation‘s 11-track album, Monolith Of Inhumanity, is an achievement that stands out as one of the most volatile, ambitious, and impossible-to-pigeonhole records of 2012.

Blow The Scene recently caught up with Cattle Decapitation singer and front man Ryan Travis for an exclusive interview that you can read here.