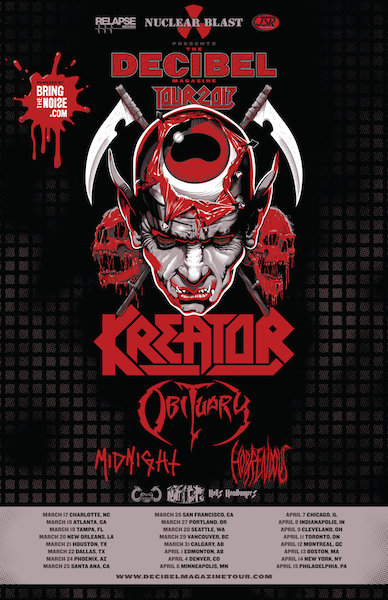 Since its inception in 2004, Decibel has redefined what a metal magazine can accomplish. From authoritative books and celebrated festivals to the revitalization of the classic flexi disc format and the creation of the renowned Decibel Hall of Fame series, Decibel continues to push far beyond the accepted boundaries of print. The annual Decibel Magazine Tour — launched in 2012 — may very well be the finest of its ventures. For the past six years, ambitious curation has unified artists from far reaches of the extreme universe who would otherwise never have the opportunity to tour North America together. The lineup for the 2017 Decibel Magazine Tour continues that proud tradition, as German thrash metal founders Kreator align with Florida death metal legends Obituary, old-school Ohio brutalizers Midnight and celebrated progressive death prodigies Horrendous (with regional openers in select markets to be announced next year).

Of 2017’s four featured acts, two will release new LPs in 2017 to coincide with the Decibel Tour: Kreator, with their fourteenth full-length album, Gods of Violence; and Obituary, with tenth effort Obituary. The latter have already been honored with an authoritative Hall of Fame feature on 1990’s landmark album Cause of Death. In 2015, Horrendous took home Decibel’s Album of the Year honor for their Anareta release. Additionally, Kreator, Midnight and Horrendous have each recorded and released exclusive tracks via the Decibel Flexi Series, and Obituary will soon join them, recording a flexi track that will appear in the annual Decibel Tour issue of the magazine that hits stands March 2017.

Tickets for the 2017 Decibel Magazine Tour are on sale now at www.decibelmagazine.com. All dates and venues are below.