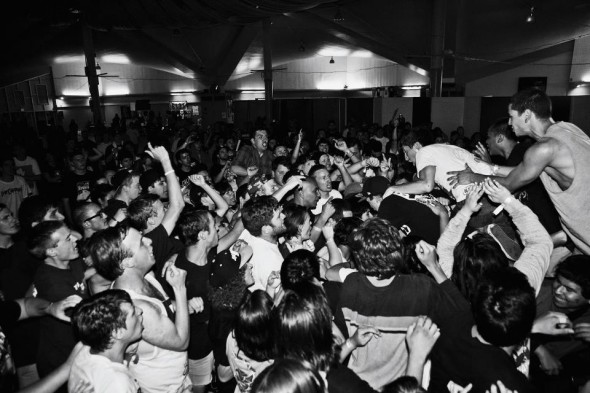 Once again, California’s juggernaut of a summer festival, Sound & Fury, will be taking place in Santa Barbara at the Earl Warren Showgrounds the last weekend of July. In its 8th year, the festival boasts its most diverse lineup thus far.

Bands like Tragedy, Strife, Rotting Out, The Ghost Inside, Reign Supreme and more were announced today in the first round of confirmed bands. Sound & Fury organizers will post additional acts (65+ bands scheduled for the weekend), vendor information, and more details leading up to the festival. Three-day passes are available now for $90 and include a free download of Early Graves‘ live set from last year’s Sound & Fury Festival. New to this year’s festival experience is a S&F VIP Package, which includes three-day admission to the festival, limited edition live LP from 2012 including tracks from Rotting Out, Tough Luck, Bent Life, Xerxes and others, a bonus downloadable live set from FocusedXMinds, silkscreened poster for Sound & Fury 2013, limited edition t-shirt, and a “cut the line” pass which will allow VIP ticket holders access to their own security line for ease of access to the venue – all limited to 150 pieces for $150. Tickets and VIP packages are on sale now exclusively through festival presenter No Sleep Records.

Sound & Fury Festival started in 2006 and has featured bands like H2O, Touche Amore, Fucked Up, Terror, Trash Talk and more as a part of their lineup in past years, making it the premiere hardcore/punk festival in California. 2013 marks the fourth year of Sound & Fury at the Earl Warren Showgrounds, located at 3400 Calle Real in Santa Barbara, CA. Stay tuned to SoundandFuryFest.com and NoSleepRecords.com for news and updates, and check out the Sound & Fury Official Festival Trailer below.

Life For A Life