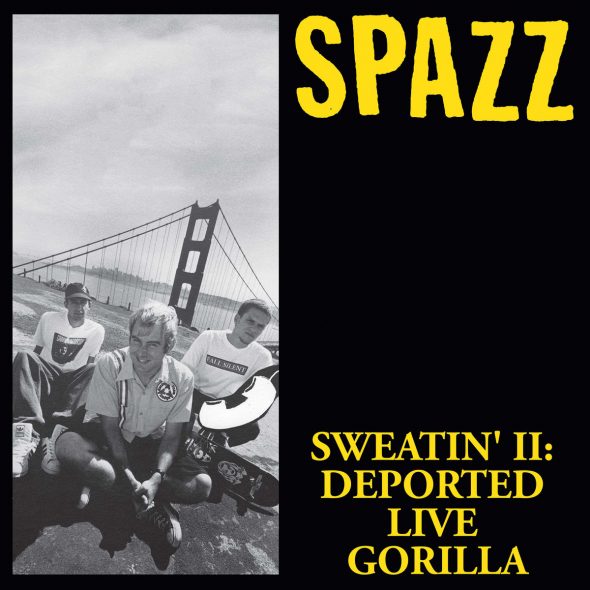 Following their reissue treatment of Sweatin’ To The Oldies and Sweatin’ 3: Skatin’, Satan & Katon from iconic, now-defunct hardcore punk/powerviolence trio, SPAZZ, this past Spring, the ear bleeders at Tankcrimes Records are pleased to bring fans Sweatin’ 2: Deported Live Gorilla just in time for the holidays!

In celebration of its release, Clrvynt is currently streaming four tracks –“Willis,” “Pager Warz,” “Katon W. Depena Without The W Is Like Grilled Cheese Without The Grill (Parts 1 And 2),” and 7 Seconds cover “War In The Head” — for communal delight. Issues Clrvynt, “There is no band that was more emblematic of powerviolence – the grit, the brutality, the jaw-dropping skill and subversive humor – than the legendary SPAZZ. Formed in 1993 and lasting until 2000, the trio of Chris Dodge (also Slap-a-Ham), Dan Lactose, and Max Ward was responsible for not only some of the fastest songs on the planet, but also influencing legions of punk, grind, metal and hardcore kids for decades to come. Their impact is unmistakable, and easy to spot within the scene. Just look for a Bruce Lee photo or a Golden Harvest logo – most likely, it’s a SPAZZ shirt or patch.”