In this edition of Blow The Scene’s Spotlight Interviews, we have caught up with Philadelphia’s Logan Neubauer who performs with leading local grindcore outfits and books some of gnarliest shows this side of Schuylkill. In this Spotlight Q & A, Logan shares with us a brief history of his show hosting endeavors, some recent memorable experiences in Philly, bands to look out for, and more! Without further ado, let’s hear from Logan!

Joshua BTS: Ahoy! Thank you for taking some time with Blow The Scene readers from around the world today! Let’s kick off by having you introduce yourself and declare your place in Philly’s underground music scene both hosting shows and performing! 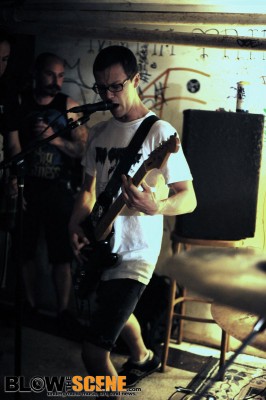 Joshua BTS:Several of your shows have been the focus of one of our most popular columns Philly House Shows. How long have you been booking shows? What was the first show you ever booked and how did it come about?

Logan Neubauer: When I lived in Ohio i would help book/promote shows in Cleveland, Columbus, and Lima. For the most part I would just draw fliers and help spread the word. One of the first shows I remember booking was Juice Tyme from DC and Harm’s Way from Chicago. It was a lot of fun for me and those who attended, but I was horribly unorganized and probably didn’t pay the bands well…something I now criticize pretty harshly.

Joshua BTS: What’s your protocol for booking a show? Do you contact bands or do let them come to you? Do have to turn down many shows b/c of high demand?

Logan Neubauer: Bands usually hit me up, although there are times that I’ll catch wind of a band that I’m a fan of going on tour and I’ll get in contact with them. There are times when I have to turn bands down or point them in the right direction, sometimes because of high demand or just because I wouldn’t realistically be able to help them, primarily since I book very specific types of shows.

Joshua BTS: What are some of your favorite aspects about booking in Philadelphia?

Logan Neubauer: Philly is cool because certain parts of the city will bring out drastically different crowds, but a killer show that is promoted well can bring all those different crowds together.

Logan Neubauer: For awhile there were a lot of shitheads that would come to a show with beer in hand, but try to say they had no money to contribute, although I wouldn’t say that issue is exclusive to Philly. During the summer there’s an influx of squatters, and while some of them are really cool people some are just fucking obnoxious idiots that have no business at a punk show.

Joshua BTS: What are some of your favorite spots to book/play in Philly?

Logan Neubauer: The Terrordome and The Bordello (both R.I.P.) for sure. Some of the long-running houses in West Philly have great layouts and awesome people that live in them.

Joshua BTS: With such a large amount of shows under your belt, I am sure you get to see a wide variety of bands. Any local or national bands that you’ve seen come through that are really exciting you?

Logan Neubauer: Generally I tend to book hardcore (and its sub-genres, and sub-sub-genres), some of the bands that I’m into and lucky enough to have booked are Gride (Czech Republic), In Disgust (CA), PLF (TX), Margrudergrind (DC), Shitstorm (FL), The Kill (Australia), Wormrot (Singapore) and plenty of others that I can’t remember right off the top of my head.

Joshua BTS: Apart from your musical endeavors, what does your day-to-day look like?

Logan Neubauer: I work a shitty part-time food service job that gives me a lot of free-time, largely due to my reduced hours, haha. I hang out with my roommates watching horror movies or discontinued TV series. I play a lot of guitar, draw, drink in the park, ride my bike…nothing too wild really.

Joshua BTS: I know from personal experience, the shows you book can get wild – cops showing up, ragin’ mosh pits etc.. What are some of the shows of late that really stick out in your mind and why?

Logan Neubauer: The first show that I booked in Philly was In Disgust, in a grind-induced mania one of my friends threw a trash can across the room while another chucked a shop-vac that, unbeknownst to him, had particle board debris and nails in it. During a show for Desperate Hours and Nimbus Terrifix someone brought an inflatable Jager bottle. Most recently during Weekend Nachos someone burst open a water line in the basement.

Joshua BTS: You perform with Gash and Backslider, two awesome Philly grindcore outfits. Backslider will soon be embarking on a short tour and feature a Dude Fest feature. What can fans expect from this upcoming tour?

Logan Neubauer: We’re doing a Midwest tour with D.O.C. (DC) from July 14th-23rd, people can expect lots of amps and sets consisting of 90% blast beats. From me personally one should expect me to be drunk by 8pm with a shit-eating grin on my mustachioed face, to expect anything more would be a let down.

Joshua BTS: What is your take on the current grindcore scene in Philly and aboard? It would seems things are really picking up as of late?

Logan Neubauer: There are a lot of really sick bands in Philly that may or may not fall under the grind category, a lot of younger kids and older folks that are starting to come out with increased frequency. Some bands I’m really stoked on are Amputee, Callous, Casket, Infernal Stronghold, Nimbus Terrifix, Nothing is Over, and Self Conscious.

Joshua BTS: Where is the best place online to keep up with Backslider and Gash and your upcoming show bookings?

Logan Neubauer: Backslider has a rarely updated Facebook page while Gash has not a fucking thing….haha. Hit up ECBLAST@gmail.com for info about tons of upcoming shows.

Joshua BTS:Thank you again for taking some time with Blow The Scene readers from around the World as we look forward to keeping up with your future endeavors! Any final thoughts or shout-outs?

Logan Neubauer:Thanks for the interview dude. Support or pose.