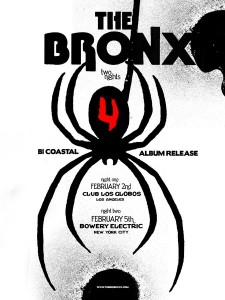 Esteemed Los Angeles punk rock band The Bronx has debuted their new single, “Youth Wasted,” from the band’s long awaited new album, The Bronx (IV). Their first album in over five years, The Bronx (IV), is due out on February 5th and can be pre-ordered now.

“With a full-frontal attack that lands between the Foo Fighters’ alternative assault and The Black Keys’ bluesy swagger, the electric “Youth Wasted” doesn’t miss a beat announcing The Bronx’s triumphant, highly evolved (and highly anticipated) return to rock.” – MTV.com

Produced by Beau Burchell, The Bronx (IV), finds the band roaring back with one of their most defiant and fierce albums to date. Their first new album in over five years features twelve barn-burning tracks like “Youth Wasted” and the recently released track “Ribcage,” which is available for stream and purchase now.

Get More:
The Bronx, MTV Shows

The Bronx has also announced plans to perform 2 album release shows in the U.S., in their hometown of Los Angeles on February 2 and in New York on February 5. Afterwards the band will head to Europe in February for a tour supporting The Bronx (IV) before returning for a tour with their beloved side project Mariachi El Bronx in March, followed by additional shows by The Bronx in the U.S. to be announced soon.

Follow the band at http://www.thebronxxx.com for additional information and upcoming announcements.

Listen to previously released “Ribcage” song stream and The Bronx Tour Dates for 2013.