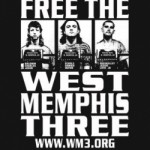 JONESBORO, Ark. (AP) — Three men convicted in the nightmarish slayings of three Cub Scouts went free Friday, nearly two decades after they were sent to prison in a case so gruesome it raised suspicions the children had been sacrificed in a Satanic ritual.

Doubts about the evidence against the trio had persisted for years and threatened to force prosecutors to put on a second trial in 2012.

Instead, the so-called West Memphis Three were permitted to plead guilty to murder in exchange for time served, ending a long long-running legal battle that had raised questions about DNA and witnesses – and attracted support from celebrities such as Johnny Depp and Eddie Vedder.

Damien Echols, Jason Baldwin and Jessie Misskelley entered the pleas under a legal provision that allowed them to maintain their innocence while acknowledging prosecutors have enough evidence to convict them.

“Although I am innocent, this plea is in my best interest,” Misskelley said.

Echols had been on Arkansas’ death row and in 1994 came within three weeks of execution. All three men were placed on 10 years’ unsupervised probation. If they re-offend, they could be sent back to prison for 21 years.

Prosecutor Scott Ellington said it would be “practically impossible after 18 years to put on a proper trial in this case. I believe this case is closed, and there are no other individuals involved.”

The victims’ families were notified about the pact ahead of time but were not asked to approve it.

After Friday’s hearing, Baldwin told reporters that he had been reluctant to plead guilty to crimes he didn’t commit. But he agreed to the deal to get Echols off death row.