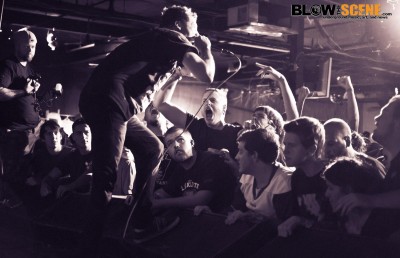 2011 has been a whirlwind year for Touche Amore. The band released their Deathwish Inc debut, Parting The Sea Between Brightness and Me, to immense critical acclaim earlier this summer and the AV Club called it “One of the most grippingly direct hardcore albums in recent memory”. Following its release, Touche Amore went on to tour the US numerous times over, play festivals like FYF, SXSW, Chaos in Tejas, Hevy Fest (UK), hit the House of Vans in Brooklyn, and tour most of the globe, including the UK, Europe, Canada, and Australia. Now, Touche Amore is excited to announce their North American headlining tour with their friends Pianos Become The Teeth and Seahaven in tow, with special guests along the way. This tour will hit all major markets in the US and Canada, and the bands will make appearances at The Fest in Gainesville, Fun Fun Fun Fest in Austin, and more. Tour dates are below. Vocalist Jeremy Bolm had this to say: “We’re excited to announce our first official headlining full US tour. Pianos Become the Teeth and Seahaven will be embarking on this journey with us in support of their new records. Circle Takes the Square will be joining us on select dates as well. We’ll be playing a wide variety of songs from our catalog, including a few we haven’t played live before. The tour runs through The Fest as well as Fun Fun Fun Fest. We look forward to this adventure!”

From the first strikes of their angular yet melodic chords, it’s apparent that Touche Amore have awoken something long forgotten in the hardcore/punk genre. Bringing to mind the balance of rage and melody that “Revolution Summer” era DC bands Rites of Spring and Ignition once carried. Within each song they build an awe inspiring musical tension while impassioned vocalist Jeremy Bolm’s shouts resonate, ripe with intellectual introspection. This collective outpouring of traditional hardcore anger and emotional hardcore openness ultimately coalesces into something beautiful, vulnerable, and refreshingly real.

Shortly after their formation in late 2007, Touché Amoré released their demo 7″EP on the No Sleep label. After touring the West Coast in support of that release, they recorded their debut album …To the Beat of a Dead Horse in early 2009. Their second full-length, Parting The Sea Between Brightness and Me, was released on June 7th 2011 by Deathwish Inc. Be sure to check the band out on the road non-stop in support of their landmark album.