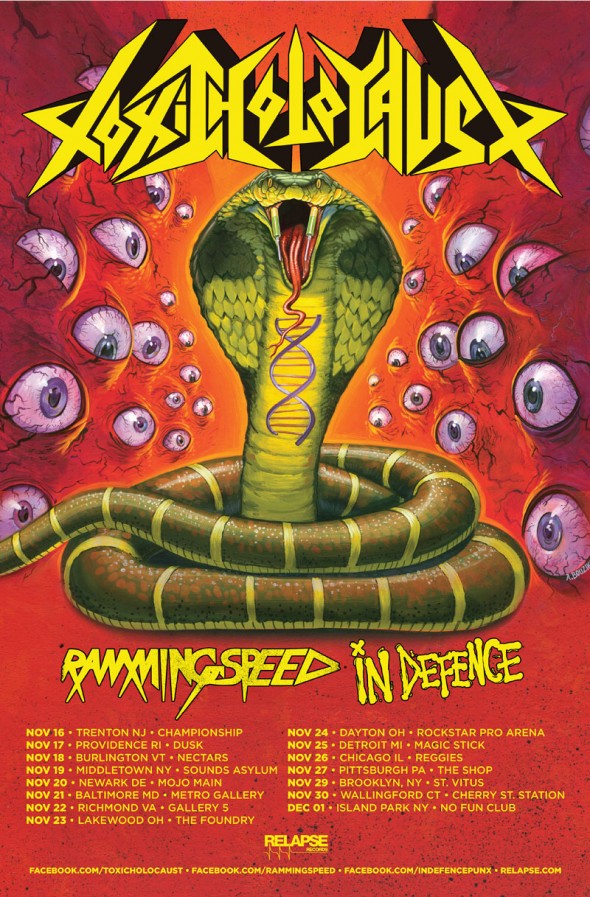 Portland’s favorite metal/punk hooligans, Toxic Holocaust, today confirm details of their US headlining tour. Set to commence November 16th in Trenton, New Jersey, the 15-date expedition will find Toxic Holocaust spreading their contagion through much of the Northeast, coming to a close December 1st in Island Park, New York. The band will be joined by Ramming Speed and In Defence. Additionally, Toxic Holocaust will perform a special Halloween procedural in Portland on October 31st with Stovokor. See a confirmed listing of dates below. European takeovers will be announced in the coming weeks.

Toxic Holocaust will be touring in support of their impending new beast of a long player, Chemistry Of Consciousness. Recorded by the band, mixed with Kurt Ballou (Converge) at GodCity Studio and mastered by Brad Boatright (Sleep, From Ashes Rise, Nails) at Audiosiege Engineering, Chemistry Of Consciousness pays tribute to the likes of Anti-Cimex, Warfare, Infernal Majesty, GBH, Discharge, Autopsy and Chaos UK without replicating them and has already raised the eyebrows of critics nationally.

Chemistry Of Consciousness will drop in North America on October 29th (October 25th in Benelux/Germany/Finland and October 28th in UK/World) on CD, LP and digitally. Preorder packages are available now.