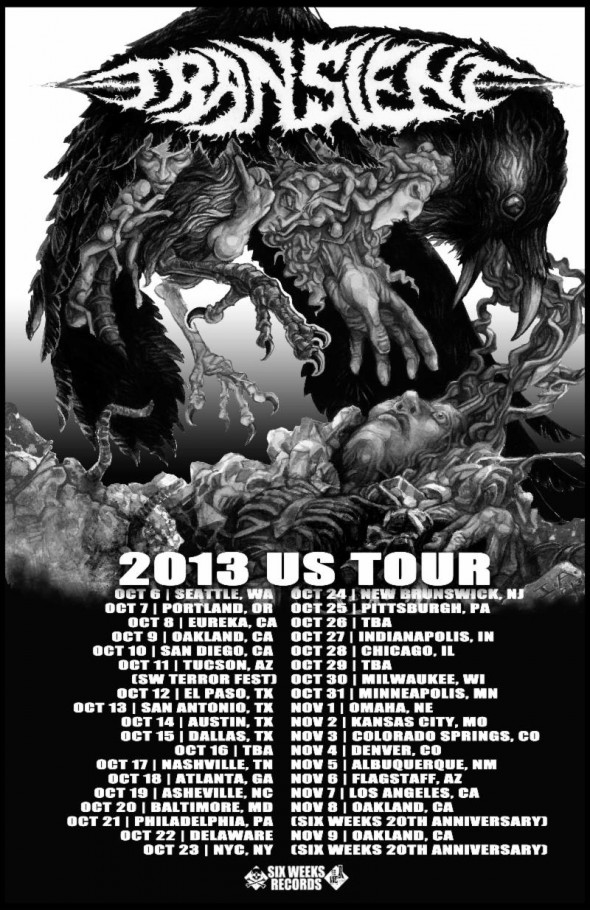 With the release of their self-titled debut LP still fresh, having infiltrated store and distro shelves for public disbursement on September 10th, via Six Weeks Records, Portland punks Transient will embark on their massive American tour in support of the platter this weekend.

“We’re all really excited to tour on the new LP and make it to all of the places we couldn’t last time after the wreck,” states vocalist Krysta Martinez of the voyage.” I know it’s not much of a quote but that’s simply how we all feel.” The “wreck” referred to took place amidst Transient‘s 2011 tour when another car slammed into their van, seriously injuring several members. It was shortly after their recovery that the quartet took to writing and recording their debut album, Transient, which the band is now venomously ready to take to the masses on this new, extensive trek of the country.

The skirmish begins this Sunday, October 6th in Seattle and includes thirty-four shows across the USofA, including a set at the second annual three-day Southwest Terror Fest with Kylesa, Godhunter, Sacred Reich, Landmine Marathon and more on October 10th, 11th and 12th in Tucson, and by the two-day celebration of Six Weeks Records‘ twentieth anniversary alongside Magrudergrind, Coke Bust, P.L.F., Slight Slappers, Capitalist Casualties and a ton more closing down the tour on November 8th and 9th in Oakland.

Transient‘scurrent tour itinerary is now mostly complete, but several shows are still being locked down. Anybody living near one of the TBA dates below who has access to a venue or simply feels like having these fine grinders infiltrate their living room or garage is encouraged to do so! Please send any show possibilities to transientbrutality@gmail.com or dave@earsplitcompound.com.

Transient‘s self-titled debut LP was recorded at Soundhouse Studio with Brandon Fitzsimons (Wormwood), and unleashes a jagged, caustic, punk-fueled grind attack, carrying out sixteen acts of abrasive and enraged socio-political angst in just over twenty minutes, which has been championed by journalists around the world over recent weeks.

Stream the entire collection of damaging anthems with an exclusive stream of Transient at Blow The Scene RIGHT HERE.