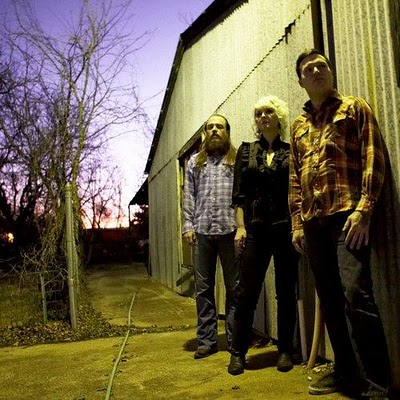 True Widow have completed work on their first album for Kemado Records, As High As The Highest Heavens and From The Center to the Circumference of the Earth, with a release date now set for Mar. 29, 2011.

The Dallas-based trio signed to Kemado Records in August and quickly began work on the follow-up to their 2008 self-titled debut. Produced by True Widow and recorded by Matt Pence (Centro-Matic, Ester Drang), the nine-song album was recorded at Denton, Texas studio, The Echo Lab.

True Widow‘s debut album quickly won over fans as news of the independent release spread. Aquarius Records were early champions of the band, sharing these words with customers, “Every song here is practically perfect, and each one segues seamlessly into the next, the sort of record where you don’t just remember the melody or the lyrics, but which songs comes next, and how long the pause between songs is, the sound just so hypnotic and mesmerizing, a sort of lyseric doom pop, a druggy post rock, but the thing is, none of that really explains how addictive these songs seem to be. Literally, from the moment we first heard this record, we have not been able to stop listening to it.” In the press, the band was lauded for their “morphine-induced melodies dripping with haunting, heartfelt lyrics” (AOL Spinner).