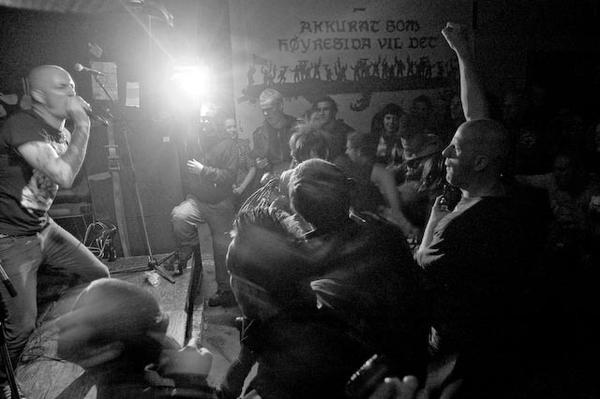 Continuing our weekly feature of one Maryland Death Fest band per week as we are counting down to the show..Legendary Swedish hardcore outfit Wolfbrigade is our current focus. This band is an absolute MUST SEE as their Saturday, May 29 (11.35) headlining feature at MDF is Wolfbrigade’s only scheduled American appearance this year.

Formed in 1995, Wolfbrigade is widely recognized as one of the most important D-beat punk bands of all time. Fusing elements of Swedish crust punk, death metal, and hardcore, Wolfbrigade have served as a major influence to many genre-defining bands such as Tragedy, Trap Them, Victims, and From Ashes Rise. The band was originally formed under the name Wolfpack but this title was eventually dropped b/c of a Swedish neo-nazi prison-gang adopting the same moniker.

Wolfbrigade saw just shy of dozen releases from 1995 through their original notice of disbandment in 2004. Wolfbrigade emerged from the shadows in January of 2007, announcing through their Myspace profile that they would be reuniting. Pulling bassist Johan from Today’s Overdose (which features several members of WB), the band released Prey To The World, in June 2007 as their comeback album which was received with open arms by fans throughout the world.

In 2008, the band saw a major setback weeks before they were to embark on a massive US tour which was to be accompanied by the release of the band’s newest work Comalive. With the collapse of their record label Profane Existence Records, Wolfbrigade not only lost all financing for the tour, but also had to push the release of Comalive to the back burner. Tour was canceled and the fate of Comalive remained uncertain.

Woldfbrigade was finally able to release the album in late Decemeber of 2008 through Farewell and La Familia Records in Europe and Deranged Records for American and Canadian fans.

Close Up Magazine (Sweden) – hailed the album, stating “Regardless what music genre you like it always depends on if it has that special groove. You know that special ability to speak directly to the listener, so you feel the music in your spine and your groin instead of it taking a detour through the brain. Stockholm based WOLFBRIGADE knows this very well.”Comalive”, their 8th full-length, is an absolutely supreme display on groovy rawpunk. In tracks like “Ride for a fall”, “Deny Tomorrow” and “Barren Dreams” they layer foaming aggression with rock solid pumping d-beat and the energy is focused on direct hits, not on undistinctive speed. This is, together with Avskum’s “Uppror Underifrån”, THE Swedish punk album of 2008.”

We at BTS are calling this one early; Woflbrigade’s performance this year at MDF has the makings of “legendary” written all over it.

Under-Rock Dwellers – You can sample Wolfbrigade’s music at their Official Myspace page. Get your your late pass and prepare for the onslaught 🙂