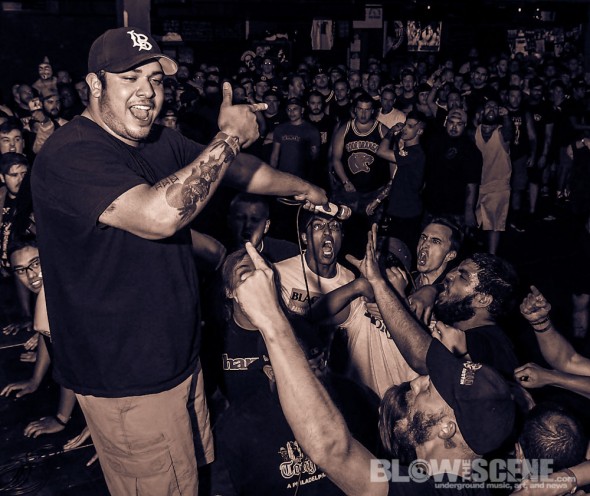 Pomona, California’s Xibalba has unchained the first single from their approaching Tierra Y Libertad LP with a stream of the album’s third track, “Invierno,” now playing at Noisey.

Bearing an impressive arsenal of recordings amassed since 2010, including notable splits, EPs, demos and two prior LPs, each chapter of Xibalba‘s recorded bloodline to date has seen the band expand upon their dense, hateful sound, and their third LP, Tierra Y Libertad, proves to follow this ominous path. With some of the band’s most savage death metal-fueled hardcore and decimating breakdowns to date, Xibalba still continues to impress with new atmospheric tones and harrowing elements without straying from their unstoppable warpath. With nearly forty-four minutes of unrelenting revolutionary violence, Tierra Y Libertad was recorded by Taylor Young (Nails, Twitching Tongues, Disgrace) at The Pit in Van Nuys, as with their lauded Hasta La Muerte LP, and the cover art as well following the path of Hasta with the employment of Dan Seagrave (Dismember, Entombed, Suffocation) for Tierra Y Libertad’s cover artwork.

Southern Lord will issue Tierra Y Libertad on CD, LP and digital outlets on January 26th in Europe and the 27th in North America.

In union with the release of their new works, the notorious road warriors will begin punishing audiences with the new album live. Xibalba has declared a string of Tierra Y Libertad record release shows, with tour dates now scheduled on both the West and East Coasts in January and February. Xibalba will hit Los Angeles and Berkeley on January 30th and 21st with All Out War and Skinfather, followed by a San Diego show on February 7th with Excel and Rotting Out. Directly after that they’ll raid the East Coast with five shows from February 18th through 22nd. With shows in Albany, Haverhill, Amityville, Baltimore and Providence slated with The Banner on all dates, Rude Awakening will play the last three shows, and All Out War will also join the Amityville and Baltimore dates.

Stand by for further Xibalba developments in January including an official video for the album’s opening track, “Enemigo,” additional tour dates and more.