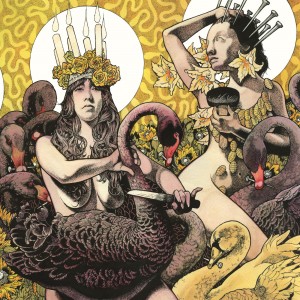 “It’s all about building your color palette with instruments and sounds, and painting a broad picture,” Baizley said during an interview with Blow The Scene at Philadelphia’s TLA in May.

Although he was quick to shrug off his own metaphor for the necessity of change, it may be the insight needed to begin to grapple with his band’s assiduous third album, Yellow and Green, a 75-minute behemoth set for release Tuesday (June 17) on Relapse Records.

For the first time in nearly a decade, the Savannah-based act took a year off while making the focus of 2011 writing new material for Yellow and Green, which was recorded at Water Music Studios in Hoboken, NJ with co-producer John Congleton. The culmination of Baizley‘s efforts alongside fellow guitarist Pete Adams and drummer Allen Blickle comes in the form of a genre-swirling ride that gushes over 18 tracks, which are equally divided between the yellow and green themes, essentially two individual albums bound together.

“Every song has kind of got its own story – its own arc,” said Baizley, who also happens to be a phenomenal painter, crafting his own band’s iconic Art Nouveau album art and designs for the likes of Black Tusk, Torche and Darkest Hour. “One thing that we’ve never done is stuck to a formula when we’re writing.”

The word best suited to describe the itinerant Yellow and Green is mellow, which matches Baizley‘s description of his band’s spring tour with Meshuggah and Decapitated. This album often deviates from the metal path and wanders into new territory. It retains some of the heaviness cultivated on the group’s debut full-length, 2007’s Red Album, which was recorded by fellow Savannah-dweller Philip Cope of Kylesa, as well as the levels of shred found blazing across 2009’s illustrious Blue Record, while shoveling on heaps of ambiance and clean intros. In these regards, Yellow and Greene may not be that different from its consanguineous primary color-themed brethren. 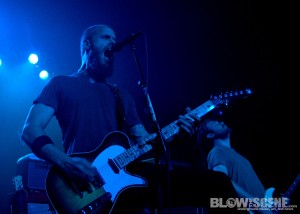 The major overhaul has been to the vocals, which were previously comprised of Baizley‘s bellow, a suitable companion to the guitars that let the band’s instrumental prowess shine. On Yellow and Green the frontman takes a stab at singing – truly singing – sending his lyrics on challenging new paths. Given the band’s mission, as described by Baizley in May, such a move shouldn’t come as a surprise.

“Music is not supposed to be easy in my mind. It’s supposed to be a challenge. If something becomes redundant, repetitive, you need to attack that and say: ‘Why is there this redundancy? Have I fallen into a pattern? And is that pattern an artistic one or a creative one because most patterns aren’t?’ When something becomes too repetitive, I just want to change it. I just want to see it move forward and turn into something else.”

Yellow and Green is genuinely a move forward that doesn’t seek to merely propitiate its listeners. Patience is the key to unfurling this tapestry of sound.

Tracks such as “Take My Bones Away,” the album’s post-introduction leader and thoroughly promoted single, and “March to the Sea,” provide familiar territory. On the former, Baizley roars the simple but catchy title-turned-chorus enough to lodge it deeply into a listener’s brain. The song also unleashes a groovy, distorted bass line that grinds along wonderfully. The bass chugs along to help open the latter track, which employs some serious riffage built on bubbly hammer-ons layered beneath the chorus.

However, many of the tracks on this album will challenge fans who are hell-bent on resisting change. 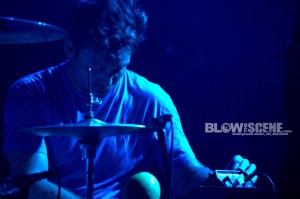 For example, “Little Things” contains a blistering solo, but not until nearly four minutes in. The majority of the song drifts between pop and shoe-gaze inspired licks, over lyrics such as: “You’re a greasy little thing – you scream before you sing – and you make a lot of noise. You lied about everything. You greasy little thing.” It’s an infectious number, but it requires patience and a few spins.

“Cocainium” transports the listener to a psychedelic realm that belongs as much to the 60s as it does to the neo-hip resurgence. You may stop and ask, “Who is this?” before welcoming it and climbing back on board with Baizley‘s ethos of change.

Two themes that aren’t color-based run rampant through this album: nautical lyrics and lengthy clean introductions. For the former look no further than: “Take me away from the ocean, already gone away, I’ve already gone” (“Board Up the House”) or “When my ship comes in, I find a way to breathe again” (“Sea Lungs”). As for the numerous intros, only two songs (one-ninth of the tracks) on the album come out swinging from the onset.

While this may not be the traditional Baroness album, if there is such a thing, it is inventive and progressive – even if it doesn’t always know where it’s going. And isn’t that half the fun?

As Baizley put it: “It’s really quite mysterious to me how songs are even written to begin with, so when they happen, you just don’t ask.”

1 Green Theme
2 Board Up the House
3 Mtns. (The Crown & Anchor)
4 Foolsong
5 Collapse
6 Psalms Alive
7 Stretchmarker
8 The Line Between
9 If I Forget Thee, Lowcountry