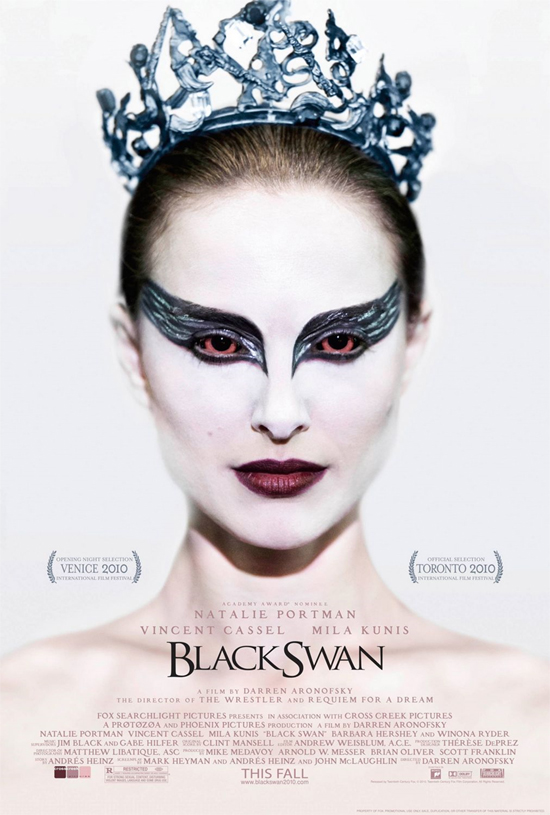 To the high culture neophytes more comfortable at the corner dive than the theater, there is something innately creepy about the ballet. Sinewy women and overly graceful men with uncomfortable posture and the ability to bend in ways most did not believe possible, dancing a story; it’s like big-budget miming. Though incomprehensible to those whose toes cannot support their weight, the ballet is the ideal world for the magnetic Black Swan, a psychological thriller in which the mundane is filled with eerie frights for the mentally fragmenting protagonist as she transforms into the role of a lifetime.

Nina (Natalie Portman) is a member of a New York City ballet company, a perfectionist who scratches so hard at every flaw that she bleeds. Locked in a perpetual adolescence by her overbearing, obsessed mother (Barbara Hershey), she dreams ballet while surrounded by plush animals in her eerily childlike pink room. She’s just won the complex dual role of the White and Black Swan in her company’s “stripped down, visceral” production of Swan Lake, a role that director Thomas (Vincent Cassel) gives her reluctantly, despite his misgivings about the “sweet girl’s” ability to handle the swan’s dark alter ego. He urges her to loosen up, that “perfection is about letting go,” to surprise herself, let her dark side take hold. After all, the darkness is what made aging star Beth (Winona Ryder) such a dynamic talent. Of course, it’s also what made her throw herself in front of a moving car when her days in the spotlight were officially over. And besides, fun is anathema to Nina as she continues her ascetic, frigid lifestyle (like that of Catherine Deneuve in Repulsion) that brings hallucinations and the compulsive urge to tear the skin from her back. 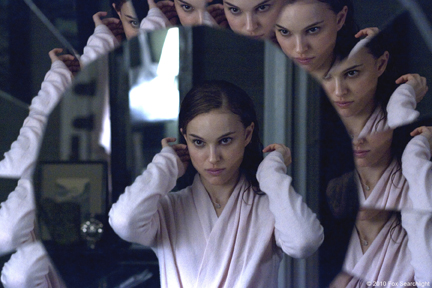 Then in walks Lily (Mila Kunis), her doppelganger, sabotaging Nina’s performance with a casual slam of the door. She is Nina’s Tyler Durden—a smoking, drinking, ecstasy-taking, salacious, stress-free bad influence who arrives to liberate the repressed ballerina from her stringent, oppressive self-discipline. But when Nina starts arriving late to rehearsal and Lily is named her understudy, the fragile protagonist’s hallucinations become more vivid than just a profusely bleeding finger and she grows convinced that Lily is intent on her destruction.

Maybe Lily’s just the physical manifestation of Nina’s dark side. A wanton woman with the black swan’s bony wings already tattooed on her back, who embodies the effortless passion that Nina lacks. Director Darren Aronofsky uses visual cues, dressing the immature Nina in pink and white while the seductive Lily sports black and dark makeup, mimicking the archetypical dark and light swans established in Tchaikovsky’s definitive ballet to explore the duality of human nature that extends to every character in the drama. Does Tomas exploit his dancers for sexual favors or use sex to make them better performers? Is Nina’s mother a vicariously-living child worshiper who can’t bear to let her daughter grow up or is she sheltering a woman she knows to be too unstable to be on her own? Is Lily trying to sabotage Nina to steal her role or is she just the new girl, trying to help and get in good with the company? Nina, in her rapidly declining mental state, only sees one side.

Black Swan is a graceful, haunting film similar to The Machinist and Roman Polanski’s apartment series classics Repulsion and The Tenant; chilling films that ambiguously deal with a character’s descent into madness. The suspense hinges on the protagonist’s, and thus the viewer’s, inability to discern fact from fantasy, but Aronofsky takes it a step further. He incorporates techniques from horror movies to create a psychological drama with the shriek-inducing moments of a slasher flick. He uses horror movie tricks to great effect, like unexpected loud, non-diegetic noises and fleeting glimpses of something dark and indistinct automatically processed by the audience as a lurking threat. Where these can often feel forced and cheap in lesser films, Aronofsky’s world is an eerie one, seen through the eyes of paranoid, self-destructive Nina and thus the moments of fear seem natural. The fleeting presence of an obscene old businessman—who appears to have been beamed to New York from Twin Peaks’ Black Lodge—and an ominous, sinister original score makes the mundane activity of riding the subway to work as suspenseful a voyage as Janet Leigh’s drive to the Bates Motel. And the versatile Aronofsky melds the genres seamlessly to craft an original film that is simultaneously a unique work and a modern reinvention of Swan Lake.

While Quentin Tarantino has given a new meaning to the “talkie” film, Tim Burton has relegated himself to crafting creepy children’s stories and M. Night Shyamalan owns the bleak, repetitive, predictable plot twist genre, it’s refreshing to see a director with such range. Black Swan is nothing like The Wrestler which was nothing like Requiem for a Dream which was nothing like Pi. And in his latest Oscar-nominated film, Aronofsky shows that he’s mastering suspense, as the film elicits that uneasy feeling so exemplified by the late-in-the-season episodes of Dexter. Seeing all the action through Nina’s filter eliminates omniscience, thereby rendering the audience just as tense as Nina through the entire film. Viewers experience her fear, her confusion, her anxiety without, thankfully, the cheap and easy help of 3-D glasses. This ambitious undertaking requires the complete commitment that Aronofsky has given. No flashbacks, no obvious hints to dream sequences, no scenes without Nina present.

There are so many ways that this ambitious film could have failed. The obvious parallel between Nina’s transformation from the “sweet girl” trapped like Rapunzel in her Manhattan high rise to her Annakin Skywalker turn to the Dark Side and her character’s journey from white to black swan could have merely been a way to steal a timeless plot from the public domain. Instead, it feels organic, like a 90-minute build up to a glorious crescendo of mental anguish and confusion. It’s dancing, kissing, groping, blood, the subway shrieks on its tracks, scratching, stabbing, running, hiding, spinning, moaning, falling, sprouting wings and finally, the anti-resolution that makes Black Swan stick.