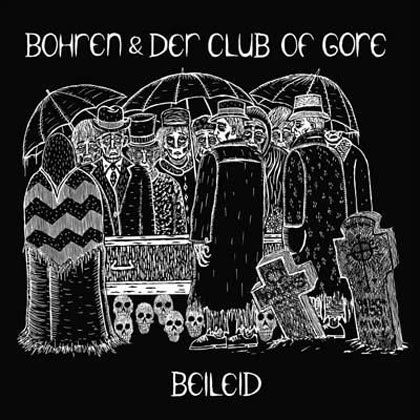 Bohren is German for “drilling,” and their whole modus operandi is digging deep within music to find brooding moods and melancholy. Doom and jazz may sound like polar opposites to most ears, but their excellent releases Dolores and Black Earth have put them on the map amongst many music circles, ranging from metalheads, stoner rockers, and even modern composers. Beileid is their first release in three years, and it’s a mixed bag of new directions and reminiscing on old glory.

Bohren have a knack for creating a mixture between lounge jazz/elevator music and creepy brooding atmosphere. On one hand, you’d play this for friends and they’d expect a crooner like Barry Manilow to make an appearance. On the other, they may start to feel a little uneasy and ask to turn up the lights. This is the exact duplicity that the ensemble thrives on. You’ll have funeral dirges with saxophones and horns, and easy listening passages transformed by what you can swear is a Black Sabbath riff transformed into glacial-speed classical music.

If you haven’t heard them before, nothing I can tell you can properly describe their sound. It’s one that you have to experience for yourselves. However, they changed pace a little on Beileid, which can be a good or bad thing for long-time listeners. There are certainly more kitschy leads to be found here, and their cover of Warlock’s “Catch My Heart” is certainly interesting, with Ipecac label-owner and vocalist extraordinaire Mike Patton (Faith No More, Fantomas, Dillinger Escape Plan and many others) taking a brand new turn on the old metal ballad.

And this is where Bohren really misses their mark. With the amazingly dark and brooding moods on Dolores and Black Earth, if you’ve come to expect more rainy day music, you’ll have significantly less here. It’s still dark and moody, but somehow, their songwriting has gone more in the direction of being novelty. They had carved out an interesting niche for themselves, and it’s hard to tell if this three song EP was more of an experiment or the direction they are heading in. At times when listening to “Catch My Heart,” you may take a step back and laugh. Patton has some of the coolest pipes ever, and at times, you can feel the despair that he’s attempting to portray on the cover. And in the next, you’re wondering if he’s trying to pull his best Pavarotti or Lionel Richie. Because of his flamboyant style, he goes back and forth between several styles, and some of them are more comical than in-line with the mood.

It hurts my my heart to snub Patton and Bohren, because I really want to like the track. The original is extremely different, but Warlock vocalist Doro Pesch had a certain methodology to her flipping between singing and screaming and crying out. A lot of that is lost in translation here and it’s a shame, because this should’ve been the centerpiece of the EP that really created new fans. The music is absolutely fantastic, and I can’t help but feel that Patton’s thumbprint on it took it down a few notches instead of up.

Luckily, the band does make up for the missteps of the first two tracks with the eponymous track, “Beileid.” While the first instrumental track sounds like a cheesy film noire B-movie and the second cut with Patton just fumbles over itself, “Beileid” is the good old Bohren that long-time fans will remember and appreciate. It’s like the darkest depths of Morphine, and then some. Imagine yourself on the rainiest day of the year, with the skies black as ash. Sewers are flooding and backing up, and there isn’t a soul outside. All you have left to yourself is your introspection and sorrow. This is what Bohren & der Club of Gore epitomizes and it’s such a perfect track to finish, with bells and the Earth-esque percussion: molasses-paced, heavy, and served cold.

This 35 minute entourage does have a lot of ups-and-downs, but if you can extract the raw power of the music of two-thirds of this album, you’ll see why this band has such a good future ahead of it. Or shall we say, a bleak one?

Overall, it’s worth a listen for long-time fans, but newbies should go back through their previous albums and find the real substance. If you like your jazz to sound like SunnO)))…well, sans the distorted guitars, but still heavy in other ways and just as dark, this is your band.