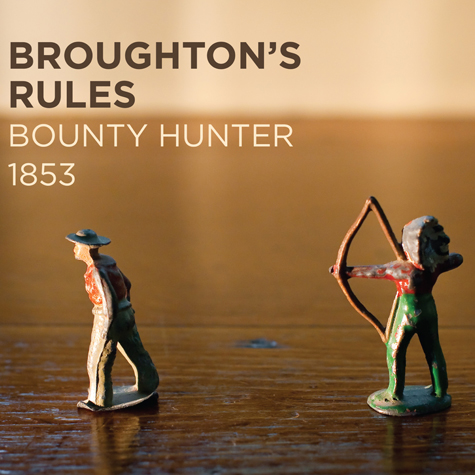 Broughton’s Rules…what does that mean? Established by John “Jack” Broughton in the 1700s, it was the first “code” adhered to by boxing to reduce the number of fatalities in the sport. What does it mean today? A Pittsburgh-band that’s as hard-hitting and punchy as any other rock band out there. And if you can pardon the puns, they come out swinging, in fantastic fashion. Along with this review, we were able to catch up with guitarist Jeff Ellsworth for some info about the band’s history and plans.

The first thing you’ll notice is the Steve Albini-like production: very bass-heavy, huge drums, and jagged guitars all over this 60+ minute debut album. In fact, you may hear some similarities in the sound to Ellsworth’s old band, Don Caballero. And you’re right; not only did Jeff play with Don Cab, but his new band recorded in the same place Don Cab has been recording their more recent albums, with Al Sutton at Rustbelt studios in Michigan.

Besides Jeff’s connection to Don Caballero, he has also played with guitarist Ben Matthews and bassist Jim Nemeth in Blunderbuss, and drummer Dennis Kern in Creta Bourzia (which is ironically how he, Gene Doyle, and Jason Jouver became the new Don Caballero along with founding member Damon Che). But Jeff went for greener pastures, going more groove-oriented and playing with his mates in a few of his previous bands.

“We pretty much aren’t thinking about odd-time signatures,” said Ellsworth. “We just go ‘Here’s the basis of the song,’ and move from part to part and see how it feels. The idea of math rock is not the forefront of the music. It shouldn’t be about the time signature, it should be about the song.”

Broughton’s Rules spent a good bit before getting into the studio to release Bounty Hunter 1853. “It took a long time because of our schedules [for writing the material], but the recording process went pretty quickly…maybe two days for each (the tracking and overdubs, respectively),” said Ellsworth. And they pulled no punches, as Ellsworth noted that “We recorded pretty much everything we had.”

The opening title track, “Bounty Hunter 1853” opens with full-force, with heavy tom work from Dennis, a little minor second bass melody, and floating reverbed guitar lead-work. This shows the roots of where Broughton’s Rules came from, both Blunderbuss and Creta Bourzia, specifically when they launch into the start-stop section in the song. Yet, it still retains an edge and wakes up the listener from the very first note. Part of the [film music composer] Ennio Morricone influence is felt in the lead lines juxtaposed on the hard rock backing.

There are a good bit of overdubs on the record. Ellsworth mentioned that there are harmonica and piano overdubs. Eric Hoegemeyer played all of the piano bits, and Mike Rhodes sang on the only track on this record that features vocals, “Broadside.” 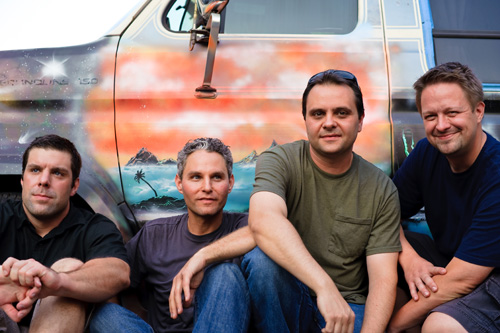 Speaking of “Broadside,” guest vocalist Mike Rhodes is featured much like Rob Crow was for the closing track for Sleeping People’s Growing. It’s odd when you hear an instrumental band throw in vocals (see Don Caballero’s Punkgasm for another example), but Jeff stated “We’re happy with it. Ben sang in Blunderbuss and would try some vocals in practice, but we think the music was pretty difficult to sing over, so we decided to remain pretty much instrumental.”

“Disaster of the Week,” “Glass Eye,” “Ghost Heavy Days” and the standout lengthy jam “Night Smoker” all have that classic Creta Bourzia/Don Cab feel. There’s a heavy scooped bass sound [a la The Jesus Lizard], guitars locking & interweaving around each other, and a mid-tempo stomp that puts them along peers like Slint and Polvo.

“Night Smoker” deserves its own mention here; for the band to stay interesting, without vocals, mind you, for 10+ minutes is a testament to them being here. Unlike most post-rock bands that just drag on forever, the band begins with a traditional Spaghetti-western sound with some whammy pedal harmonies situating themselves underneath the “Old West” guitar melody. Then WHAM! Just before the two minute mark hits, the battery of Jim Nemeth and Dennis Kern lay the backdrop for a toe-tapping and catchy song. And what happens 2 minutes later is a drastic change of pace working its way to a fever pitch. This climax is nothing new to post-rock, but instead of dwelling it on it, the band keeps changing the rhythm and tempo, including a moment where everyone drops out so that Nemeth can begin it all anew, but not as a retread of the beginning. Fantastic. Post-rock bands, do your homework by studying this band: this is how you avoid being boring while still getting your point across.

When asked about the length of “Night Smoker” Jeff mused, “We never really thought that we had to shorten it down, or people might get bored. In practice, after we recorded it, we were like ‘Wow this is pretty long,’ and when we got into the studio it ended up being about 10 minutes. It was the right length though, as the song ended when it needed to end.”

The “Old West” is prevalent throughout as the aforementioned Ennio Morricone vibe is all over the lead guitar work, and shows up in plenty of the band’s songs. In fact, many of the song titles feel like they could be part of vignettes in Clint Eastwood or Charles Bronson feature film. “Moonsick” mixes a Morricone-cum-Danny Elfman intro into a pounding rocker.

While the band often does put in rocking bits, it’s when they switch things up that the listeners should take notice. Check out the drum-machine filled “Childhood Sun,” which owes plenty to kraut rock bands like Neu! and Can. Then there’s the percussion-less Robert Fripp-inspired “15 Seconds Before Dawn,” with plenty of noodling, but with purpose. It segues perfectly into “Silver or Lead,” which could’ve easily been the closer. And this was one of the only detractors, as the finale “Wheatfield with Crows,” feels just a tad bit unnecessary and tacked-on here.

The band is doing a short East Coast jaunt through the end of this month into early December. Jeff claims that Mexican food is what the band enjoys on the road, but as far as locally in Pittsburgh you might catch them at “our favorite places: Gypsy Café in Southside and Claudio’s in Bridgeville.” And if you still aren’t sold on how powerful Broughton’s Rules are, how about a glowing endorsement from the Smiling Moose in Pittsburgh: the doorman said that Broughton’s Rules is one of the loudest bands he’s ever seen, next to Jucifer and Brown Angel. A(n ear-)ringing endorsement indeed.