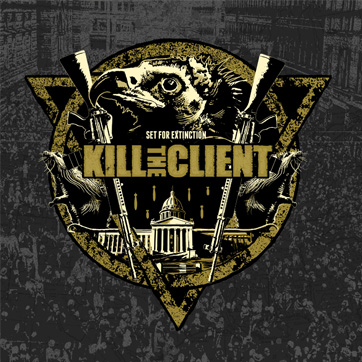 Grind enthusiasts have some preconceived notions of what we find acceptable in a grind record.

First set of rules: Music has to fast, pissed, and abrasive.

Upon first listen of Kill The Client’s Relapse Records debut, Set For Extinction, we can quickly check these off the list. The riffs and accompanying drum work clock in at breakneck speed, punctuated by a ferocious vocal attack reminiscent of NYC’s Brutal Truth – Need to Control, 90’s era grind.

Set For Extinction has an average track length of around 1:15. 19 tracks in 23 minutes to be exact. Another check.

A good grind record needs a plethora of blast beats, poignant chords, and a monstrous sound, thick with low-end goodness and hearty distortion. Leave the over-production and Pro-tools edits for our metal counterparts. Another check for Set For Extinction.

Kill The Client have no trouble delivering a punishing musical assault of one crushing riff after the next. They have the grind genre down to a science. But in today’s music market, extreme music fans need more than politically driven, pissed off, abrasive tunes we’ve come to expect from the genre definers, such as Phobia, Brutal Truth, Pig Destroyer, and Napalm Death. So the moments that really shine through on Set For Extinction are the glimpses of light whereKill The Client display their wider set of influences. This becomes apparent in standouts, such as track 16, “The Walking Dead.” Here we see singer Champ Morgan leave his comfort range and begin to dabble in some gore-grind influenced attacks, reminiscent of Sweden’s Regurgitate and even gore grind heavy-weights Cock and Ball Torture. When these slower riffs start to give way and break into a whirlwind of faster progressions, it makes the band’s staple sound all-the-more brutal.

Variation again leads to success in track 19, “Cull The Head,” where we hear the guitars stray from their comfort zone into some speedy black-metal influenced progressions that again compliment the steady grind elements of the song. See a pattern developing?

Track 4, “As Roaches” and track 11, “Industry of Fear” is where Kill The Client introduce some d-beat influenced, slower, but equally intense riffs to perk up those tiny hairs in you inner ear canal. Guys, you are onto something with these tasty variations. As the band develops and continues to carve a name for themselves in the grind world, look for these variations to become a powerful motif within the songs’ contexts.

You can be the most brutal, uncompromising band on the planet, but as soon as you become predicable, it doesn’t matter if you are dropping bombs, the sound is going to fall flat and become anti-climatic. Incorporating these well crafted variations into the grind comfort zone is going to be key as Kill The Client begins to etch a permanent place in grindcore history.

Overall, I suspect grind fans will embrace Set For Extinction into their beloved collections as this forthcoming release will prove a pivotal step in Kill The Client’s approach to the zenith of their creative output. Solid release, with the best yet to come. 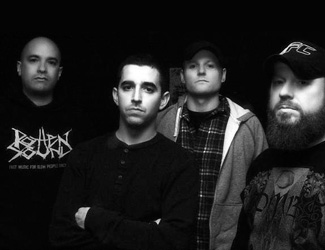