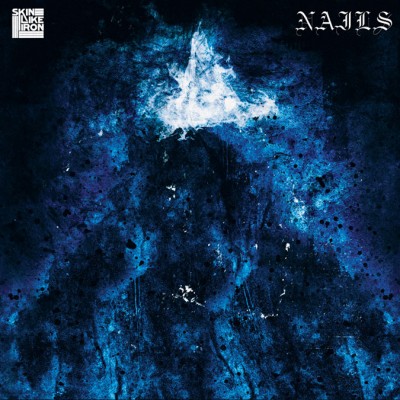 One of the first great odd parings of 2012 is coming in the form of a split 7″ EP by death-infused-hardcore-grinders Nails along with hardcore mainstays Skin Like Iron. Each band has contributed two songs to this 4-song shredder due to hit streets January 31, 2012.

Skin Like Iron kick things off with an emotional powerhouse of a track entitled “Disappear,” which drives forward with intense clarity, upbeat underbelly, before singer Alex Capasso drops his patented high-end, irate, screaming delivery that pushes this track into the stratosphere. Capasso also constructed the cover art you see above as his artistic imprint has been seen on many of Skin Like Iron‘s releases. Hitting you in all of the right spots, this reviewer is honestly dumbfounded. I didn’t expect to get run over by anything else that excited me before 2012, but here we are.

Skin Like Iron infuse many layers of melodic string-work that strokes an emotional chord without becoming cheesy or predictable. This is something often attempted but rarely executed well within the hardcore scene. Hats off.

The b-side of this split drives forward, pedal-to-the-floor compliments of Oxnard, CA’s Nails, who with the 2010 release of their Unsilent Death LP, have crafted one of the toughest sounds in all of the niche genres encompassed under the hardcore umbrella.

With opening track “Annihilation,” Nails do what they do best- bludgeon the listener with a barrage of meaty distortions, double-bass, and varying elements and tempos of punk, grind, and hardcore that is many an extreme listener’s wet dream. No bullshit, no frills, just some hard-ass riffs to demolish your stereo. At 2 minutes and 51 seconds, the length of this opening Nails track is almost uncanny for a band that rarely hits the two-minute mark, but make no mistake, I am not complaining. Closing track “Cry Wolf” hits you like a jackhammer stuck in overdrive for the best 24-seconds a 2012 release has yet to offer.

The cherry on top is the fact that this split 7″ EP is self-released. Bulletproof.