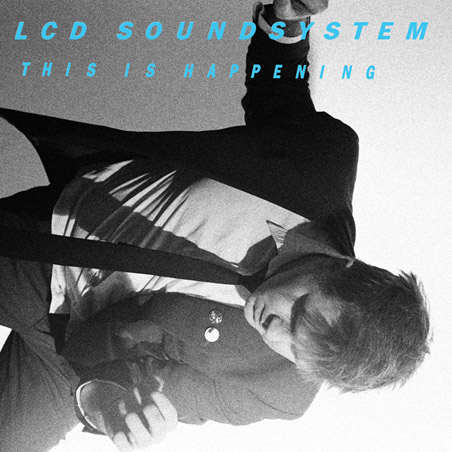 Patience is a virtue…or so all the sages and soothsayers in various walks of life explain to us. This also applies heavily to music. Take acts like Tool and Radiohead, who release extravagant albums, but take years to do so. When LCD Soundsystem front-man James Murphy exclaims, “You wanted a hit? / but that’s not what we do,” in band’s latest full-length effort, This is Happening – he’s sharing their honest methodology.

Opening track “Dance Yrself Clean” takes about 3 minutes to really get going. Having this kind of patience is expected of LCD’s fans these days. Don’t expect them to go on tour for you throughout their living days, or give you a dance beat from the second you push Play. LCD spend their time in the studio, growing as a unit, and release delectable albums that need to be fully absorbed before you can cast any sort of judgments. That’s not to say that “Dance Yrself Clean” starts with 3 minutes of fluff. The song embarks upon a lo-fi beat with a simplistic keyboard-led bass line that sits uncomfortably beneath Murphy’s delicate voice. This creates a tension in the song ready to burst at the seams. In fact, at first blush, you’d think you were listening to a They Might Be Giants record. Once the main synth and the drums come in, you’re in for a thrill-ride.

LCD took the liberty of making this a very long record. The album does drag on at times, but only momentarily. Apart from the incredibly catchy and direct single “Drunk Girls” [for which the music video really needs to be witnessed], none of the songs are under the 5 minute mark, and even extend as far as 9+ minutes. This is not a Yes record folks. LCD is not afraid to reach out and write some long tunes without caring for what their audience wants. It’s kind of ironic, considering that their audience wants them to release monumental songs time and time again.

The aforementioned “Dance Yrself Clean” gets going with Murphy taking up his voice about an octave, while the backbeat provides an old 70s disco vibe(a la Kool & the Gang interspersed with the painstakingly crafted retro synth sounds of electronic pioneers Kraftwerk).

The single “Drunk Girls” has a very neat Velvet Underground homage. The parallel drawn here is to “White Light/White Heat,” with Mr. Murphy doing his version of Lou Reed, and the gang behind him alternating between “Drunk Girls” and “Drunk Boys” in the same order as the Velvet’s.

Songs like “One Touch” and “Pow Pow” [comparisons to “Losing My Edge” are prevalent] could easily be featured as a vignette for the next Victoria’s Secret Fashion Show. This is rather common these days, as Make the Girl Dance showed last year with their breakthrough crossover hit, “Baby Baby Baby”. These two, along with “Drunk Girls” allow the backing band [especially keyboardist Nancy Whang] to chant/shout/sing along. It is within this musical zenith where the band often hits their stride. These are the dance party hits, so to speak.

The only downer on this album was “Somebody’s Calling Me.” Seemingly paying homage to Sound of Silver’s “New York I Love You,” something just feels weird about this track. The flow is broken and combined with a peculiar analog synth not matching James’s pitch; the track becomes grating to listen to after seven great arrangements. The New Orleans blues vibe can be felt, but it just feels out of place.

Also noteworthy, is the great track “You Wanted a Hit.” As a sense of irony, the song is 9 minutes, but the first two minutes are spent hanging in the same oriental-tinged melody over a pulsating filtered kickdrum. We get the point, but this is one of those points where it feels like time was added just for time’s sake.

LCD Soundsystem really hit it out of the park with their closer, “Home.” A similar vocal harmony that emanates from the opening track makes a second appearance here. This is where you feel that they’re working as a well-oiled machine. When the song ends, you feel yourself clamoring for more.

Speaking of working cohesively, the most amazing moments of this album are when LCD lets the full majesty of their arrangements come to fruition. Moments in “Drunk Girls” [2:56], “Pow Pow” [6:47, full with disco harp!], “I Can Change” [choruses], and “Home” [3:37] where multi-layered voices sing to you like angels: These are the times where you say to yourself, “How did they come up with that?”

The other wonderful thing about this record is how self-aware it is. The song self-pronounces how the band writes a hit in “You Wanted a Hit.” On “All I Want,” Murphy doesn’t want your praises, just some self-loathing: “All I want / is your pity / All I want / is your bitter tears.” And in “Drunk Girls,” you really want to believe him when he says, “I believe in waking up together (but no promises).” They’ll be damned if they cater to the critics, and some resentment shows, albeit in a fun way.

Amidst the rumors that the band will break up and this is to be their last album, will this be their swansong? It’s tough to say at this stage, but it’s hard not to find this record a little more consistent throughout than the hit machine Sound of Silver. This is Happening feels more congruent as opposed to sounding like the band just wanted to write a bunch of singles.

I know you weren’t looking to write hits, guys; but in trying not to, you really made one.

[Pre-order the new LCD Soundsystem record from iTunes and they will include two bonus cuts. You can also listen to the album in its entirety on their website: This Is Happening