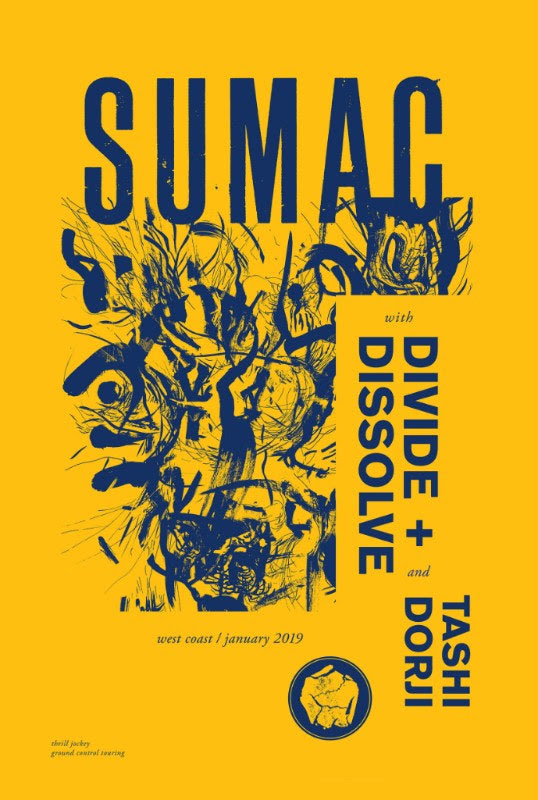 SUMAC is preparing to embark on a West Coast trek throughout the month of January along with tourmates Divide & Dissolve and Tashi Dorji.

SUMAC continues to tour in of support recent LP, Love In Shadow, noted as a brutalizing dive into love and all its raw emotions with vocalist Aaron Turner‘s (ISIS, Old Man Gloom, Mamiffer) nimble songwriting. The efforts combust in a live setting fueled by the road-honed intuition and technical prowess of the rhythm section. The resulting culmination of sound is at once complex and primal.

Across four protracted songs, Turner and his cohorts—Nick Yacyshyn (Baptists, Erosion) on drums and Brian Cook (Russian Circles) on bass—interlace and mangle sounds from their instruments in a sonic homage to both the innate warmth of human magnetism and the cold realities of corrupted love—jealousy, obsession, perversion, addiction. Turner explains,

Since many of the surface level aspects of our being are often used as divisive tools to separate and alienate us from one another, the intent with Love In Shadow is to reveal that all humans desire and need to be loved and accepted for who they are, for just being.

Engineer Kurt Ballou (Converge, Cult Leader) recorded the album live with the goal of minimal overdubs or fixes over five days at Robert Lang Studios in Shoreline, WA. The result is an album that sounds more alive and human than the common computer grid-built mechanically perfect metal record.

The album also serves to highlight what some of the repercussions are for love that is scorned, suppressed or socially discouraged—we lash out against one another, our love turns to fear, we disparage ourselves, we try to fulfill the need for love through unhealthy means—and on a more destructive level, those in positions of power are compelled to annihilate and oppress others.

Love can be beautiful. Love can be ugly. But at its core, it’s alive, unpredictable, and volatile. On Love In Shadow, SUMAC captures that passion in the most primal and unfettered manner possible.