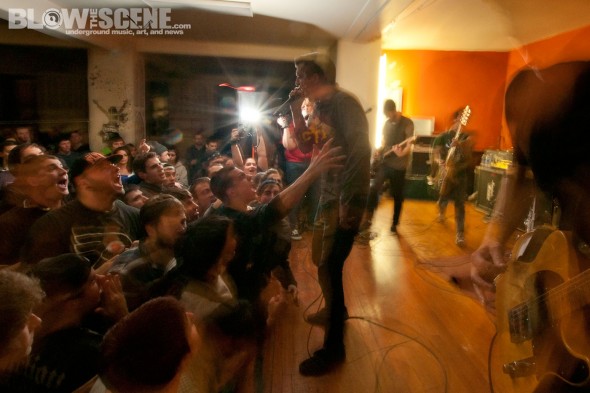 A band known for their captivating and comprehensive storytelling just as much as their elaborate and complex music, Massachusetts’ Defeater recently wrapped recording their third full-length album, Letters Home, which is their absolute best work yet. These ten new tracks are heavy and haunting, while lyrically poignant and continuing the story of a working class family living in post-WWII America. Letters Home revolves around the father of two brothers that listeners were introduced to in two of Defeater‘s prior releases (Travels and most recently Empty Days & Sleepless Nights), giving a background to the character and seeing some of the events from those past albums through his eyes. Vocalist Derek Archambault commented, “Inspiration for this record came from a few places. Much like with Lost Ground, these stories are based around my two grandfathers’ service in WWII.” He continued, “Musically the record hearkens back to Travels and Lost Ground. EDSN was a bit of a departure for us, and I think we took some good chances on that record but Letters Home brings it back to why we started this band in the first place five years ago.”

Letters Home is legitimately Defeater‘s heaviest body of music thus far – featuring powerfully intricate guitar instrumentation, colossal-sounding drums, and Archambault‘s voice sounding more ferocious than ever before. Guitarist Jay Maas remarked, “Letters Home is more focused on sounding dirty and mean, but at the same time we have improved as songwriters so some of these ten tracks are our most accessible.” The album was once again recorded at Maas‘s own Getaway Recording Studio (where the band’s prior releases were also tracked), and features the first recorded appearance by Defeater‘s new drummer Joe Longobardi who “…is some kind of drum wizard. His memory for organizing parts is sincerely inhuman, and he has such amazingly tasteful composition skills. Everything he plays just feels meant to be which really lends itself to an easier time for the rest of us”, said Maas. Second guitarist Jake Woodruff returns for Letters Home, as well as bassist Mike Poulin, and Derek Archaumbault on vocals and Jay Maas on guitar; all lending their skills to the newest chapter in Defeater‘s story.

This ten-song album is scheduled to hit stores on July 16th, 2013, once again on Bridge Nine Records. In support of Letters Home, Defeater will be on tour July 11th through August 4th on the second half of the Vans Warped Tour and will be out on the road thereafter as well. More touring plans will be announced soon, as well as album release details, track premieres, and more. Maas continued, “This is my favorite Defeater release; I think it pulls from all of the band members’ influences collectively and I can’t wait for people to hear it. July 16th can’t come soon enough.”